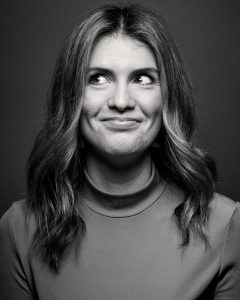 I’d say I’ve probably been an anxious person my whole life, but would always put it down to general worry about this thing or that thing. It wasn’t until my late 20s that things peaked and I experienced my first panic attack, which honestly scared the crap out of me! One of my issues is that I’m a doer, so if I’m stressed or anxious, I do stuff to distract myself from those worrying thoughts. But in doing the doing, I’d just buried a ton of those thoughts and feelings and think that panic attack was my body telling me there wasn’t room to bury any more.

Shortly after this I started seeing a counsellor which was a godsend for coping mechanisms and stress-busting strategies. I tried medication but I either couldn’t hack the spiral of anxiety or depression that often came with the initial burst of tablets, or I couldn’t bare the flattening numbness I felt with others. So I continued counselling and still see a counsellor once a month to check in and manage my occasionally wayward brain. And I discovered yoga. Bikram yoga, to be precise – for anyone not familiar it’s the extremely hot and sweaty one. I’m not sure if it’s the endorphins from all that lovely exercise, the releasing of tension in the body, or the adrenaline rush of surviving the fearsome heat, but it was like a magic wand was waved over my anxiety and stress levels would plummet after class.

I continued to regularly practise yoga for a few years whilst working in a job that fuelled anxiety. Since leaving uni I’ve worked full time in media, predominantly as a radio presenter featuring a short spat of jumping from the radio frying pan into the magazine fire and back again. I love my job – the adrenaline rush of live radio is one of my favourite things in the world. But it’s also a highly volatile industry working from self-employed contract to contract, where you’re as disposable as disposable can be and egos and finances can (and did) take a regular battering because of it. Why the heck a highly anxious person picks a job that holds such high risk is baffling, but I love the buzz of it and I think in a way I was hooked on the thrill of not knowing what came next. And if I lost a job and cried about the fact I’d been found out for being a bit rubbish, I’d somehow get another job and that relief would drip-feed itself into my self-belief and make me keep going.

As I got older racking up 15 years in the biz, I think I checked in on why I was doing what I was doing, and whether what I got out of it was worth that unsettling feeling that came as my contract neared its end. And I wasn’t sure it was. So I decided to seek more career fulfilment by hopping on a plane to India and training to be a yoga teacher! I thought I could be my own boss, make my own success, and Yoga had helped my anxiety in such wonderful ways that I wanted to share that with other people. What I didn’t anticipate was that teaching yoga would also muster up a lot of fear and anxiety in me – “Am I good enough?” “What if people don’t come to my classes?” “What if I can’t make any money?” “What if people don’t like me?” etc.

Weirdly I’d still managed to pick another job in which I felt quite exposed and vulnerable and at the mercy of others opinions of me. Even thinking about those first few classes makes my body turn to jelly – I was a complete, total, utterly anxious mess! And even a year on I still feel kinda twitchy before I teach a class, but I also know that my anxiety helps me to do a good job. It gives me that drive to do well, to perform, to make people happy. So although these mental health issues can often feel like only bad things, there are positives lurking in there somewhere, we just have to remember to find them.